As mentioned in the earlier post, most of today’s standing structures and lintels of Preah Vihear were constructed during the reign of Suryavarman I (1010-1050). He has often evoked researches regarding expansion of Khmer Rule in present day north-east Thailand; constructing new temples; renovating/adding new structures to existing temples; as well as strengthening Iconography of Dancing Shiva in temples, which was already documented by Pre-Angkor rulers as early as 7th century ACE.

Here is another temple devoted to Lord Shiva, towards the southern end of today’s Cambodia.  Phnom Chissor, built during the rule of Suryavarman I,  displays the sculpture of Adalvallan/Dancing Shiva. The temple offers no disappointment-  one can find Shiva’s humble devotee, Karaikkal Ammai sitting below Him watching his eternal dance. 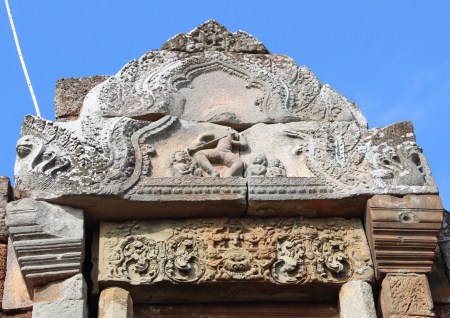 ammai to the right of adalvallan

To the left of shiva is the person with ‘muzhavu’ – the percussion instrument.

karaikkal ammaiyar with cymbals in hand

Like Prasat Preah Vihear built on top of Dangrek Mountains, Temple Phnom Chissor is  also built on top of Mount Chissor; and was originally known as ‘Suryaparvata’ or the mountain of the Sun God, named after the King who constructed it. The Shiva Lingam or the main deity of the temple was called ‘Suryavarmeswara’.

Located in Takeo Province of Cambodia, about 70 kms south of present day capital Phnom Penh, reaching Phnom Chissor requires a climb of more than 400 steps from the southern entry to the temple. The impressive sandstone lintels and intricately designed doorframes are testimonies to a majestic Empire’s architectural inclination.

These temples belong to the 11th century ACE. But, the worship of Shiva Nataraja in Cambodia dates back to early 7th century ACE. The Isanapura inscriptions of Isanavarman I in Sambor Prei Kuk mentions it.

The people of Ancient Cambodia worshiped the Shiva Nataraja since the 5th C.A.D. The K.440 inscription of King Ishanavarman I who ruled around 616-628 A.D. recorded the installation of the silver image of Nrittesvara. http://documents.mx/documents/karaikal-in-cambodia.html

Additionally, Dancing Shiva with ten arms is specified in the Takeo inscriptions of Suryavarman I, which refers to an image of ‘Natakesvara (king of dancers) with ten arms (dasabhuja). mireille benisti
The dancing Shiva in Phnom Chissor doesn’t have 10 arms, but the common string instrument in the hands of the eternal dancer is something to be noted. The sculptors of Adalvallan in Battambang, Preah Vihear and Phnom Chissor have given an instrumental possession to the Dancer and they are similar too. 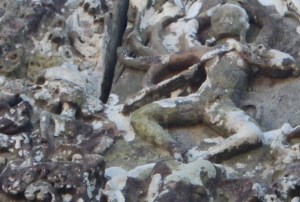 Mireille Benisti, French scholar and researcher of early Khmer Art and comparative Indian Art and Iconography, first published an article in 1967, in ‘Bulletin de l’École française d’Extrême-Orient’ under the topic – ‘Notes d’iconographie khmère’ –  the title of the article being – ‘AU SUJET D’UN LINTEAU DE VAT BASET’ (On the Lintel of Vat Baset).

In the previous post, it was mentioned that Mireille Benisti published an article on Karaikkal Ammaiyar in Vat Baset in the year 1976, based on the book ‘Karaikkalammaiyar: An iconographical and textual study by Peter J. J. de Bruijn. However, subsequent online searches revealed that she could be the first scholar to have noticed Karaikkal Ammai in Khmer Temple Art. She first documents the iconographic presence of Ammai in Vat Baset and then in Banteay Srei and Prasat Hin Phimai (Thailand) in her articles in the same Bulletin in 1967 and 1969 respectively.

According to Ms. Benisti, ‘the Baphuon style’ of the temple architecture and the inscriptions in the sanctuary (Vat Baset) may date back to mid-eleventh century, during the reign of Suryavarman I, but the lintel of dancing shiva and karaikkal ammai might belong to the second half of the eleventh century, an assertion, she attributes to the style of Kala Head, Branches and other ornamental representations sculpted in the temple.

This lintel mentioned by Ms. Benisti couldn’t be located in Vat Baset during my visit in December 2014.  I feel the picture published by Ms. Benisti is similar to the lintel found outside Battambang Museum. Hence, the lintel that Ms. Benisti saw at Vat Baset in 1967, could  possibly be the one currently (December 2014) placed outside the Museum. She also explains about the ten armed Adalvallan dancing between two female characters.