The Sculptures of Karaikkal Ammai with picture perfect iconography in Cambodia and Thailand should inspire researchers to explore more on the Tamil Links with South East Asia. Hence, the places in Medieval Thamizhagam, where the patronisation of the saint started in stone could form the CORE CHARACTER of any analytical study and certainly is fundamental for any such research.

As per available iconographic evidences, Karaikkal Ammai, the pioneer saint of the Bhakti Movement in India who lived in the 5th/6th century ACE during the reign of Pallavas seems to have been sculpted for the very first time in Shiva Temples built by the Chola Kings. The first Chola Royalty to have brought Karaikkal Ammai in temple sculptures is Chembiyan Madevi, the consort of Gandaraditha Cholan, who ruled the Chola country for a very short period from 950 ACE to 957 ACE.

The Grand Old Lady of the Chola Empire

After defeating the Pallavas,  Cholas claimed power over the lands of Thamizhagam with Vijayalaya Chola in mid 9th Century AD, followed by Aditya and Paranthaka who built temples at their creative best. After Paranthaka, there was a slight deviation towards Devotion over aspirations of conquest and thirst of power. Gandarathitha. son of Paranthaka I who came to power next was a staunch devotee of Shiva more than an ambitious King. His wife Chembiyan Madevi was a true consort to his likes of Devotion. Gandarathitha an ardent Shiva Devotee himself, has sung hymns on the Lord and his hymn is included in the 9th Thirumurai.

While Gandarathitha died at an early age with his son still very young, Arinjaya his brother ascended the throne. After the death of her husband Gandarathitha, Chembiyan Madevi devoted her life for the cause of Devotion to Lord Shiva and stood up as a Majestic Lady hailed for building numerous Shiva Temples during the second half of 10th century ACE. Her valid contributions to the welfare of villagers and upbringing of culturally-religiously oriented Chola Off-springs still remain distinctly unrecognized, yet documented well in inscriptions.

To simply mention that Chembian Madevi built many temples during her life-time would be a thorough under statement of her Pioneering Abilities. Madeviyar has a long list of innovations and initiatives to her credit, in making the Chola temples more diverse – through design changes in temple architecture like increasing the number of Niches, which seem to be minimalistic until her father-in-law Paranthaka’s period.

Losing her husband at a very early age, with a young son still not ready to attain the throne of Chola Empire, this strong hearted Lady of Tamil Civilization diverted and focused her concentration on religious activities. Madevi has always been a major donor to temples even during Paranthaka’s reign, as a crown princess and also during her husband’s reign.

The Pinnacle Achievement through Temples

Not succumbing to her personal losses, she rose up as a truly brave soul and a remarkably respectful character in the Tamil Bhakti Sphere, through her amazing Will to rewrite Culture, Religion and Diversify Temple Architecture through Temples built during her long octogenarian life time. This certainly can be termed as the Pinnacle Achievement of the Grand Old Lady, who lived to see six successful Emperors of her Land, the Chola Territory. Indeed, very true – married at a very early age and becoming part of Chola Empire, the daughter-in-law of King Paranthaka Chola, Chembiyan Madevi has had the unique life of experiencing and cherishing the Chola Supremacy during the rule of six Emperors.

She lived a highly deferential life as a guiding force for 5 Kings of Chola Empire starting from her husband Gandarathitha’s rule.

the most gracious ammai – in koogur 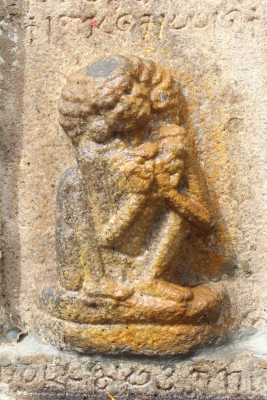 Chembian Madevi – the Grand Old Lady of the Chola Empire- is of utmost importance for any research on Karaikkal Ammai. This is precisely because she seems to be the Pioneer Queen to have ordered sculptural representation of Karaikkal Ammai in most of the Shiva Temples she built and those brick temples she renovated in stone. The life of the Skeletal Mother of the Tamil Bhakti Movement, must have left such a deep impact on the Queen, that Chembiyan Madevi makes Ammai’s presence as per Ammai’s wish – sitting below the dancing feet of Adalvallan – Nataraja,  mesmerized in his cosmic dance.

The undeciphered connect of these two Pioneers in their own respects – Madevi and Ammai, between 6th century ACE and 10th century ACE can be strongly felt in the temples. The eternal wish of a mother emotionally accepted and appreciated by another mother, and interpreted in stone- but after an interval of about 400 years in history. Truly Amazing isn’t it?

The temples built by Chembian Madevi around present day Thiruchirapalli, Thanjavur, and Nagapattinam districts in Tamilnadu stand testimony to the involvement of Chembiyan Madevi in glorifying eternally the Aura of Karaikkal Ammai.

(Refer side bar of this blog for more details on Dr. Ma. Ra. Historical Research Centre’s Profile, Publications of Dr. Kalaikkovan and his Centre’s Journal ‘Varalaru’)

I had the great honour of getting unparalleled guidance from Dr. R. Kalaikkovan, Founder, Dr. Rajamanickanar Historical Research Centre regarding Karaikkal Ammai sculptures in Tamilnadu, Chembiyan Madevi Temples, glimpses of Chola Temple Architecture, Inscriptions, Social Aspects that are preserved and revealed through temples and many more.

Achieving the Tamilnadu Government Prize for his first research book ‘KALAI VALARTHA THIRUKKOVILGAL’ published in 1985, Dr. Kalaikkovan has won several laurels for his contributions towards Historical Research. His relentless interest in exploring History through Temples has lead to the finding of several unique sculptures, paintings and inscriptions in the temples of Tamilnadu. His Centre has been publishing its annual research magazine ‘VARALARU’ since 1983.

‘Dr. Kalaikkovan is an ophthalmologist (by profession) who balances his medical practice with his ardent love for researching the state’s past, particularly through its temples’ http://www.thehindu.com/features/metroplus/bringing-the-past-to-the-present/article7310014.ece

Dr. Kalaikkovan mentioned during his travel (in November 2013) to Banteay Srei Temple, Cambodia that the skeletal figure found below Dancing Shiva was Karaikkal Ammai. He explained about the Iconography of Ammai and how Angkorian temples possessed the perfect iconography. This introduction of Ammai in Cambodia by Dr. Kalaikkovan is the root cause of my interest in Ammai and the Tamil Connections in South-east Asia. Furthermore, through Ammai, the epitome of Devotion, he has also introduced me to another Ammai, Chembian Madevi, the epitome of Early Chola Culture and Religion.

Thereafter, he also enlightened me on the temples of Chembiyan Madevi and her Devotion towards Shiva; Adding that the temples with the first sculptures of Karaikkal Ammai in Tamizhagam were constructed by Chembiyan Madevi. A visit to Tiruchirapalli and field work with the great scholar has filled me with basic knowledge about those beautifully sculpted, magnificently erected temples which are store houses of the glorious history and wonderful documental evidences of social life of Tamils in the past. A long list of the Pioneering Activities of Madevi has been my coveted collection from Dr. Kalaikkovan.

As mentioned above, she bears the exclusive specialty of introducing Karaikkal Ammai in Stone Sculptures in her temples. Apart from this ‘Launch’, which is of great importance to our research on Ammai, Chembian Madevi has carved her own Niche in breaking new grounds in Dravidian Temple Architecture. Madevi has many ‘first-times’ to her Innovations List.

♦♦There are innumerable sculptures of Agasthya found in Indonesia and sculptures of Karaikkal Ammai in Cambodia and Thailand. A tight knit research between Agasthya-Ammai and Chembian Madevi  might bring about a break-through in the research of link of the Tamils with South-East Asia. 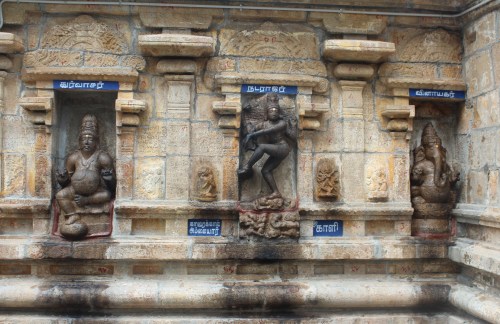 sculpture of gandaraditha in thirunaraiyur

Dancing Shiva is always associated with a number of instrumental accompaniments, played by his attendants/ganas.

In Chapter 6 of the book ‘Pen Theiva Vazhipadu’ by Dr. M. Nalini and Dr. R. Kalaikkovan, the authors define the importance of Thalaipparai, Mathalam and Sirattai Kinnari – three instruments sculpted in pallava and early chola temples. While Parai and Mathalam fall in the category of Percussion Instruments, Sirattai Kinnari is a Bowed String Instrument. (To ellaborate, it has a stringed fiddle with coconut shell body.)

According to the book, I translate –

Chembiyan Madevi, who introduces Ammai in sculptures also makes the usually ‘cymbal’ handed Karaikkal Ammai play the ‘Sirattai Kinnari’ for her Adalvallan/Dancing Shiva. The beautiful sculpture in Thiruppugalur is one of its own. This clearly shows the spirit of innovation in the Grand Old Lady, who let her sculptor create history.

This inscription is certainly a manifestation of the greatly honorable position that this Pioneer Lady held.

the inscription with the sculptor Sathan Gunabhattan’s sculpture

While we hail the western world for their documentation and easily ridicule ourselves on lack of documenting knowledge, we have comfortably forgotten our well built evidences of more than thousands of years of history – TEMPLES. It is high time we start looking at temples as social schools alongside Devotional Institutions.

The Tamil Emperors of the past have used temples as Archive Sources of their socio-economic-political lives for future generations through Inscriptions and Sculptures, but we fail to look in that angle as concentration is stuck only on the Devotional Aspect of Temples. That is the reason why websites on Temples, mostly talk about the epics and stories behind the Devotional Build Up rather than the much needed historic evidences that the Temples and the Inscriptions try to tell us.
It is high time that society realizes the importance of Temples and Inscriptions in the portrayal of our Identity. As Dr. Kalaikkovan mentions,